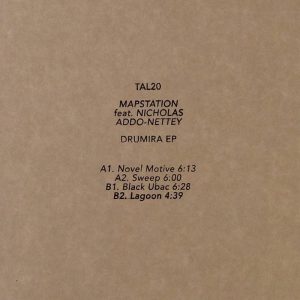 Nicholas Addo-Nettey was a former percussionist with Fela Kuti and his famous Africa 70 band during the most legendary years of his career. He has left band in 1979 in Berlin where he has been living ever since. His early solo album PAX NICHOLAS from 1971 has gained fame through a reissue in 2009.

It is interesting to note that DRUMIRA was first released anonymously in 2011 in a minuscule private pressing edition which only had a Spiegelmotiv hand stamp on the sleeve.
Due to legal issues in 2009 with some of the mapstation releases, Stefan Schneider decided to put his project on hold until things got cleared.

After nine years the record finally finds a place in the mapstation catalogue and gives full credit to all musicians involved. The EP comes with a luxurious hand assembled sleeve in a small edition.

Music wise this EP is most distinguished by the combination of slow paced dark electronics and inimitable percussion patterns by Nicholas Addo-Nettey.